Hay baler, as the name implies, is a convenient machine that is to pick hays and straws and pack them into round or square shapes. It’s suitable for hay, straw, corn stalks, etc. Packed items can be used as feed for animals usage. This straw baler should work with the tractor, equipped with the matched horsepower. It’s driven by the POT, 3-linkage suspension with the 4-wheel tractor. This hay baling machine is of simple structure, easy operation, and stable performance. If you are running a farm to feed cows or sheep or other animals, this machine will solve your problem which is the lack of grass for animals in the winter. Are you interested in it? Please get in touch with us for more details!

According to the different packed shapes, in Taizy Company, we classify the straw baler machine into two types. Of course, the hay baler price differs.

Type One: Round Baler for Sale

This hay baler machine can pick and pack hay into round types. The yarn and plastic net can be used for bundling. Based on the packed stalks, it has one model, 70*100cm(70 refers to the diameter, 100 refers to the length).

Structure of Round Baler

Parameters of Round Baling Machine

Working Progress of Round Hay Baler

Compared to type one, this square baler is to pick and wrap the stalks into square shapes. The Middle East prefers this square type. But you should attention that this machine only can use yarn. It’s fully automatic and has higher working efficiency. This machine has two models: 2m and 2.2m(harvest width).

It is composed of a baling room, spring tooth, and outlet.

The hay baler has a wide range of applications, suitable for all cereal stalks. For example, straw, hay, corn stalks, soybean stalks, rice stalks, wheat stalks, and alfalfa stalks, etc. It’s worth purchasing this machine if you’re involved in animal husbandry. Welcome to contact us and we’ll get back to you very soon!

The straw baler machine is driven by POT, 3-linkage suspension with the 4-wheel tractor. But the silage baler and wrapper is powered by the diesel engine or electric motor, no tractor. 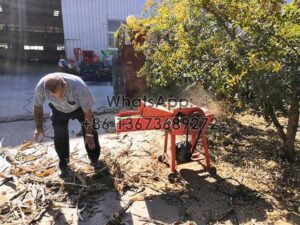 This mini chaff cutter from Taizy company belongs to 9Zseries. We classify the chaff cutter based on the production per hour. This fodder cutter has

Due to global time difference, we will reply within 24 hours.